My Visit To Gatlinburg: The Moonshine Country

This past weekend I spent my birthday in Gatlinburg and Pigeon Forge, Tennessee.  It’s exactly three and a half  hours from the city of Atlanta and I left home mid day on Friday and arrived in Pigeon Forge , Tennessee by five in the afternoon.  I checked into the hotel, put my suitcase in the room and then I search for a place to eat dinner. I was famished. I ran across the Old Mill Pottery House Café and Grille and pulled in.  When I entered the restaurant, the place was crowded  with people.  However, the wait wasn’t long, just under twenty minutes.

The waiter, a young man in his twenties with smiling eyes seated me promptly. He was quite friendly and engaging and full of jokes.  I enjoyed his sense of humor as he reviewed the dinner specials with me.  I elected not to order any of  the specials instead I ordered the “Old Forge’s Apple Pie Pork Chops topped with Old Forge’s Moonshine Apple Chutney with a side order of sautéed buttered broccoli.  The total price $16.49.  The pork chops were tender and the brocoli was sautéed to perfection. The restaurant also had a variety of very large desserts ranging from coconut crème pie to red velvet cake at a cool, low price of $3.49.  Before leaving the restaurant, I ordered a slice of coconut crème pie to go and it took me almost three days to eat the whole slice.

The next day, Saturday, I drove to Gatlinburg.  It was sunny and bright, in the forties and the temperature was expectant to rise in the mid sixties by early afternoon. I ate breakfast at Crockett’s Breakfast Camp, a cozy restaurant complete with a fireplace with a blazing fire.  This place is open daily from seven in the morning to one in the afternoon.  The restaurant’s menu was written inside of a newspaper dated November 24, 1886.  The articles made for interesting reading with news stories ranging from a logger claiming to kill over 200 black bears in one year to a German Shepherd named Cumberland Jack who hauled 90-pounds of supplies in saddle bags through the snow up Mount LeConte to his owner, Paul Adams.  The newspaper kept me entertained while I waited on my meal.  The food was fairly good.  I ordered my usual, scrambled eggs, turkey sausage, cheese grits with a biscuit and jelly.  The waiter was friendly and gracious enough to take my picture by the fireplace.

After breakfast, I spent the day exploring the quaint town of Gatlinburg.  The town’s architecture had a german feel and it was bustling with locals and tourists.  Shops, wineries and distilleries line both sides of the town’s main thoroughfare and since I am not really a fan of moonshine  whiskey,  I settled on visiting the wineries instead.  The Bootlegger’s Winery was my first stop and Skylar,  a young college aged man greeted me with a smile when I walked through the door.  He offered a wine tasting of ten different wines at $5.00 a pop.  The wines were very sweet and potent with alcohol and needless to say I was feeling quite good, at the  end of the tasting.  I ended up purchasing a bottle of Redneck Reserve for $19.95 and Skylar gave me a ten percent discount off the price.

There were other wineries in the area as well such as The Winery Tennessee, Sugarland Cellars and Apple Barn Winery.  Tennessee is known for sweet wines and moonshine whiskey.  The most popular distillery to purchase moonshine whiskey is Sugarland Distillery Company.   It’s located in the middle of downtown Gatlinburg and it was crowded with patrons when I passed by. In addition to the wineries and the distilleries, there were plenty of shops to purchase souvenirs,  homemade baked goods and nick knacks.  I especially like the Old Mill Farmhouse Kitchen  located in Pigeon Forge.   The store had a welcoming atmosphere  filled with sweet aromas of freshly baked goods. I tasted several homemade jellies, dips and preserves before leaving the store.  On my way out  I purchased a jar of butter honey along with a jar of vanilla apple pumpkin butter.

I have to say, I enjoyed my time in this store.  I finished up my Saturday visiting the Christmas Place.  A large store specializing in Christmas Decorations.  I collect ornaments, usually purchasing a new one every year.  So I bought a crystal snowman to hang on my Christmas tree.    Satisfied and shopped out,  I turned in for the evening and I looked forwarded to visiting the Great Smokey Mountain National Park the next day.

Sunday morning.   The sky was cloudy and  the air was cool and crisp with temperatures in the low thirties.   I was in the mood for a pancake breakfast and I had many pancake and flapjack houses to choose from.  I stopped by the Pancake Pantry in downtown Gatlinburg, a family owned restaurant, the first pancake house in the state of Tennessee.  The restaurant open it’s doors in the early 1960’s and since that era, the pancake house has served the public everyday with it’s variety of pancakes only closing down on the Thanksgiving and Christmas Holiday.  I especially enjoyed my sweet potato pancakes when I ate there.  I strongly recommend this pancake house as a place to visit.

After breakfast, I drove to the Great Smokey Mountains National Park.  There was no entrance fee, so I drove right in. The Great Smokey Mountains straddles the border between North Carolina and Tennessee.  The sprawling landscape encompasses lush, thick forests, along with  streams, rivers, campgrounds, picnic areas, hiking trails and several species of wildlife.  The charcoal color smokey mountains earned it’s name from the thick white mist rising off the peaks which resembles smoke.  The vegetation growing in the mountains traps and releases moisture that creates the smokey effect.

The Smokey Mountains are 6,643 feet in elevation and the Clingsman Dome Tower is a  place where one can view the entire Smokey Mountain range.   The tower was closed during my visit  there, so I settle on driving to Cades Cove instead. Along the way, I noticed the  vibrant color of the leaves  on the trees and the rushing clear water of the Little River.  The beauty of the forest was bright and alive despite the cloudy, damp weather.  During one of my many stops on the way to Cades Cove, a lady suggested I take a picture in front of the little waterfall of the Little River.   The picture came out perfect!  What a  great suggestion! 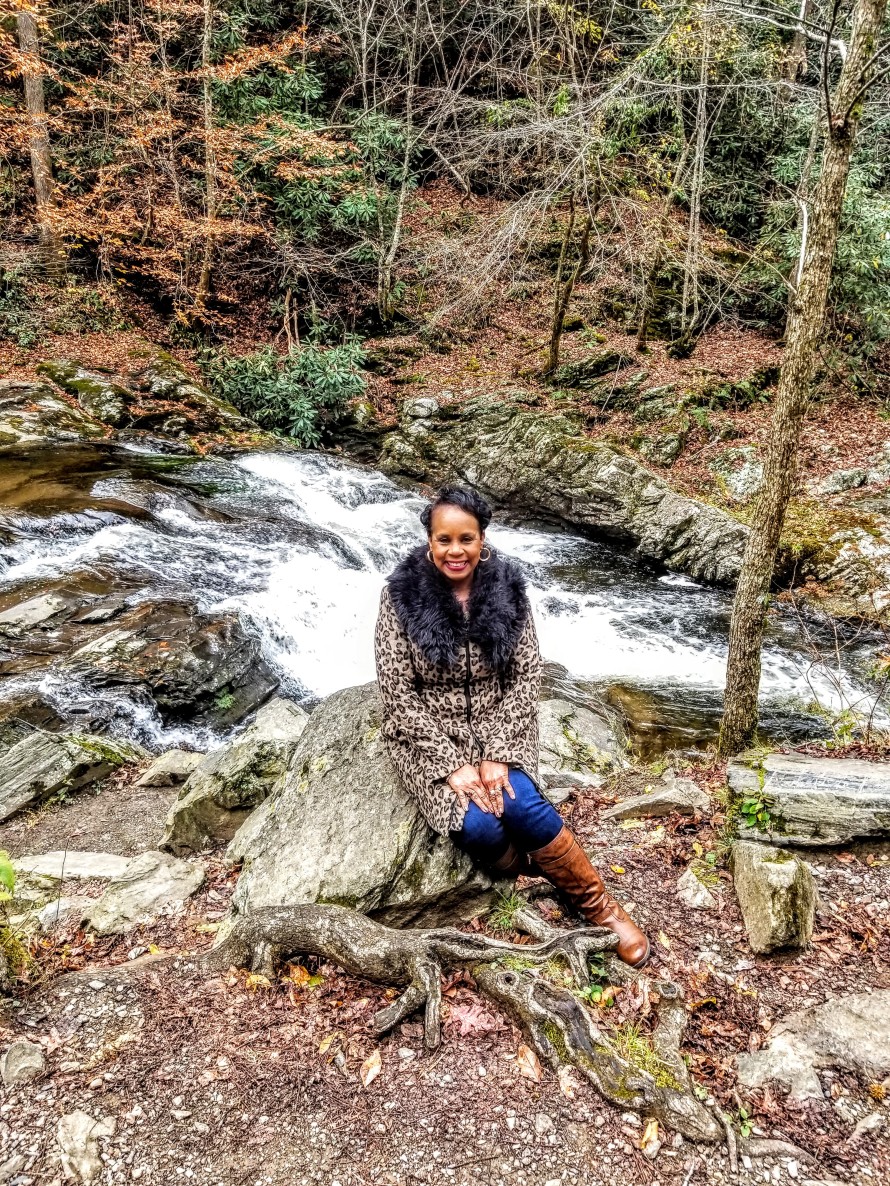 Once I arrived in Cades Cove, I witness a wolf  sprinting  across the road.  Spooked by the many vehicles stopping in the middle of the road so the drivers can take it’s picture, the wolf got away before I had an opportunity to get a picture myself.  Oh well!   Soon I found a place to parked and then I got out  of my car to explore the area.  There were signs everywhere warning park visitors of black bears.  I wasn’t the only one out walking about so I felt fairly safe.   We were all headed to John Oliver’s cabin, one of the first  mountain men to settle in Cades Cove during the civil war.  He built his homestead there where it remains today, fully intact.  See below. 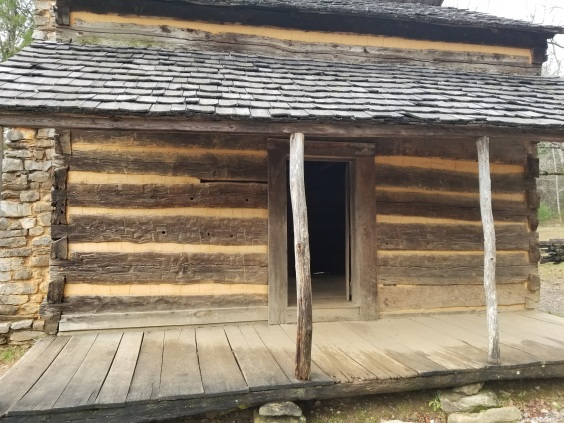 After I finish checking out John Oliver’s cabin, I return to my car and drove around the Cades Cove Loop.  The loop was exactly eleven miles long and I counted six well kept cabins along the way.  When I completed the loop, I stopped at the Cades Cove Visitor Center before heading back down the mountain.   I took several pictures of the Smokies while there and I found the mountain landscape fascinating to look at.

On the way back down Mount LeConte, the traffic suddenly came to a complete stop.  I couldn’t tell what the problem was until the traffic begin moving again.  A black bear was climbing up a tree on the side of the road and people had stopped their vehicles to take pictures. By the time I pulled over to parked so I can get out to take my own picture, the bear had gone.  Another missed opportunity! Oh well!  I did take a few pictures of the serene beautiful, colorful trees the bear was climbing in. 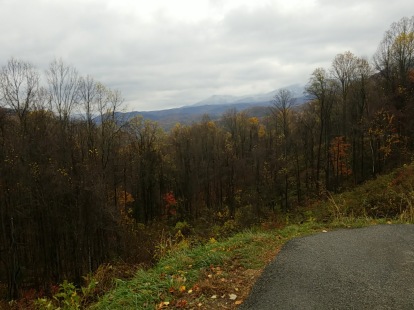 My visit to the national park took up most of the day.  I definitely enjoyed every minute of my journey.  I will be back!  There is so much to see.  I would like to visit during the summer when the flowers are in full bloom.  A notable sight, I did not visit, but is worth mentioning is the Dollywood Amusement Park in Pigeon Forge.  If you like amusement parks, I hear that’s a park you don’t want to miss.   My birthday getaway to Gatlinburg proved to be  a memorable experience and I  plan to return soon.  I hope you enjoyed reading about this amazing place as much as I enjoyed visiting there.  Until next time, remember, the best moments in life is when you go on an unplanned, exciting adventure!  Happy Thanksgiving!