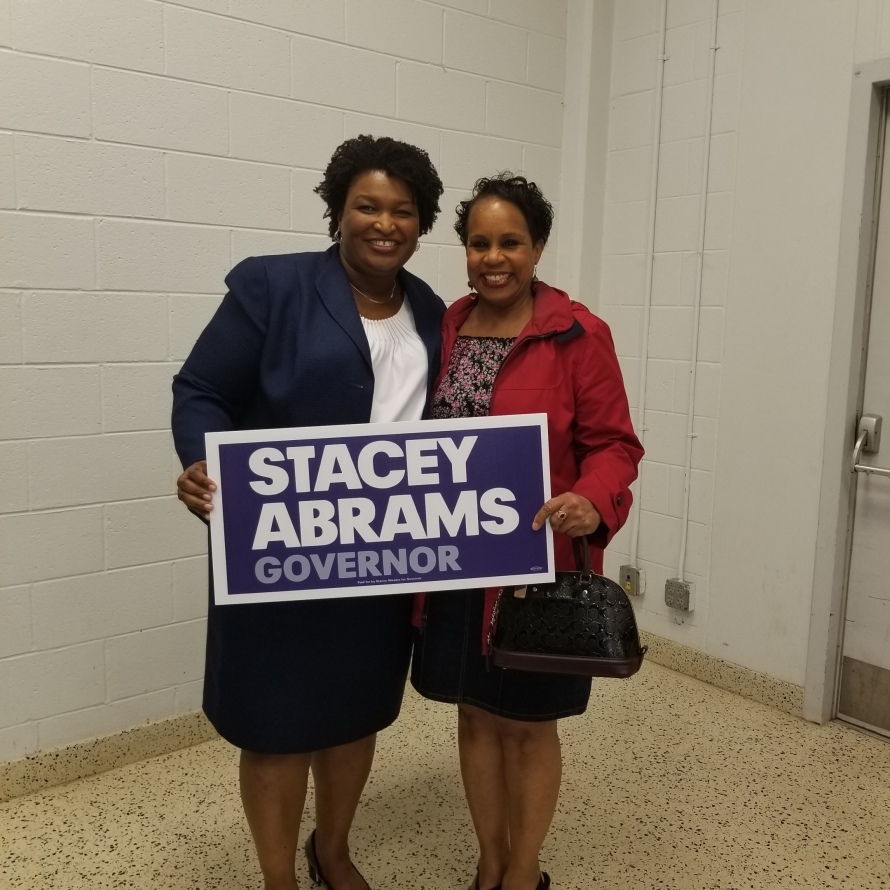 This past Saturday, I had an opportunity to meet Stacey Abrams, an African-American woman,  democrat, politician, lawyer,  and businesswoman, who is running for governor in the state of Georgia.  She is running against Stacey Evans,  a white American woman, also a democrat and a lawyer and five male established republican politicians.     What makes Ms. Abrams so unique is if she wins governorship in November, she will make history as the first African-American woman to be governor in the US and this is exciting!

She had many firsts in her background.   She is one of six siblings, born to Robert and Carolyn Abrams and she was raised in Gulfport, Mississippi.  Her family moved to Atlanta where her parents went to graduate school and became Methodist ministers.  She attended Avondale High School  and was the school’s first African-American Valedictorian.  She went onto Spellman College where she earned a Bachelor Arts degree in Political Science, Economics and Sociology, magna cum laude.  While there, she worked in the youth department  in the office of then Atlanta mayor Maynard Jackson.  She was a Harry S. Truman Scholar, majoring in public policy at the University of Texas and she went on to earned her J.D. from Yale Law School.

Ms. Abrams became the first woman to lead a party in the Georgia General Assembly and the first African-American to lead in the House of Representatives.  Her first major accomplishment as minority leader was working with Republican Governor Nathan Deal to reform and preserved the HOPE Scholarship Program.  She is a tax attorney by profession and she co-founded the NOW Corporation, a company specializing in financial services.  She has many accomplishments under her belt which makes her candidacy very exciting.

It’s exciting, not only will she break the glass ceiling for women in Georgia politics, but she has vast support statewide to make her election more than a possibility.   She has  made preparations to go the distance by building a grassroots network proved to be the strongest campaign in the state and has raised over $2.3 million dollars for her campaign war chest.  She runs an “unapologetic progressive “campaign with the hopes of mobilizing hundreds of thousands of minorities and left-leaning voters who rarely cast votes and they are coming out in droves all over the state to see her.

She has the support of former Governor Roy Barnes and Atlanta Mayor Keisha Lance Bottoms.  They are working  feverishly in a concerted effort to sway suburbanites and independents who have bolted in recent years to the GOP to  get behind her platform and support her.  Ms.  Abrams continues to stick  to a traditional strategy of stockpiling cash for a coordinated wave of broadcast ads which are now appearing on the state’s  local networks.  This race, itself,  is on track to be the most expensive gubernatorial contest in the history of the State of Georgia.